From 1872 to 1897 the Episcopalians in Coldstream were members of a Mission Church from Christ Church, Duns with a room in Coldstream. In 1897 the corrugated-iron private chapel from The Hirsel was given to them by Lord Home, on condition that the seating was free. It was taken down and rebuilt ‘with additions’ on land belonging to Lord Haddington, at a cost of c. £300. After the opening service it was affectionately known as the ‘Tin Tab’ and became an ‘Independent Congregation in the Diocese of Edinburgh’.

In 1900, tired of the draughts and leaks, it was decided to replace the Tin Tab and a building fund was started. By 1913 enough money had been raised to allow building to start. As can be seen the Foundation Stone inscription reads, ‘In the fear of God, and in the faith of the blessed trinity, this stone was laid by the Right Reverend Father in God, George, [Walpole] Bishop of Edinburgh. Feast of S.S. Simon and Jude [28th October] Anno Domini 1913’. The trowel that the Bishop used was used  by Bishop Richard Holloway to cut our 75th anniversary cake and again by Bishop John Armes to cut our centenary cake in 2013.

Just over a year later, on 25th November 1914, the Bishop dedicated the building which cost c. £ 1,100. The dedication to St.Mary was that of the Cistercian Priory of ‘Sancte Marie de Caldestrem’, Saint Mary of Coldstream, by the Earl of Dunbar in around 1150 and of the ruined mediaeval Chapel in the old graveyard at Lennel. All Souls’ reflected the Scottish dead after the Battle of Flodden (1513) just over the border in England.

The architect was Charles T. Ewing of Crieff and the pink stone came from Doddington Quarry near Wooler. The tradesmen and craftsmen were local, many of their successors’ families still living in Coldstream. A number of artefacts had come with the Tin Tab, including the ‘Dove’ window in what is now the pantry. The Sunday School children donated the two stained glass windows in the apse and the font. The Baillie Hamilton family from Lennel donated the altar, reredos and the processional cross among other items. More items followed from the stone Chapel which succeeded the Tin Tab at The Hirsel when it in turn was pulled down in 1959 and members of the Church have given many items in more recent times.

COVID 19: We are constantly keeping a watchful eye on the latest Covid restrictions and how they impact places of worship to ensure that we maintain a safe space for all to Worship.

5th Sunday at 11:15am - a joint service which rotates around the group - check for details.

Our 1st Sunday service is our Morning Gathering - a non-eucharistic Celtic style service.

Our 4th Sunday service is our Taize service, which is shared with the Parish church

Home Communion can be arranged if requested.

How to find us

St Mary's is situated on Lennel Road towards the English end of the High Street. Take the left fork at the Police Station at the east end of Coldstream High Street, go up the hill and as the road flattens out. St Mary’s is immediately on the left after Mansefield Place with a car park through the gates on the right. 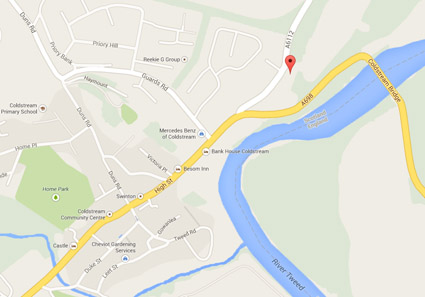